Best, worst and what’s next for Tiger Woods at the 2022 Masters 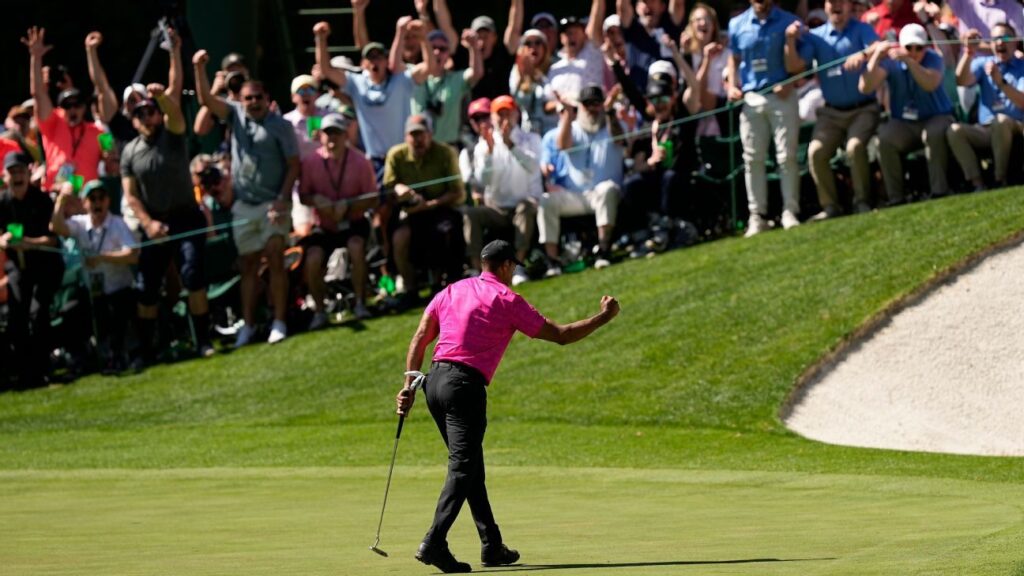 AUGUSTA, Ga. — For the first time in 509 days, Tiger Woods was back playing a competitive round of golf in the first round of the Masters at Augusta National Golf Club on Thursday.

And, thanks mostly to a hot putter, he is in the mix with a 1-under 71 after the first round.

Now, the question becomes if Woods’ surgically repaired right leg will hold up after a 17-month layoff. It has been just over 14 months since Woods was badly injured in a car wreck outside Los Angeles on Feb. 23, 2021.

“The whole idea was to keep pushing but keep recovering, and that’s the hard part each and every night — to recover, and I’ve been doing that,” Woods said. “My team’s been incredible, getting me ready. I figure once the adrenaline kicks in and we get fired up and I get into my little world, I should be able to handle business.”

Here’s the best and worst from Woods’ opening round and what comes next for the five-time Masters winner:

He still knows the place

Woods’ iron play wasn’t exceptional. His chipping and pitching weren’t great, which is a big reason why he hit just 9 of 18 greens, his fewest in an under-par round at the Masters since 2003.

But Woods’ creativity and knowledge of Augusta National are better than most everyone else in the field. He got up and down seven times in the round, which is tied for his most scrambles in a single round at the Masters since ShotLink began in 2003, according to ESPN Stats & Information.

“I know where to hit it [to] a lot of these pins, and I miss in the correct spots and give myself good angles,” Woods said. “I did that all day, and I was able to make a few putts and end up in the red like I am now.”

He was rolling it well

Woods needed just 13 putts on the first nine holes and 27 in the round, which was tied for seventh-fewest among players in the early wave.

A near ace to get going

Woods’ shot of the day came on the par-3 sixth. He hit his tee shot, from 180 yards, high into the air from an elevated green. The ball landed on the green, bounced once up the hill and stopped two feet short of the hole.

Tiger Woods drops to 1 under after a birdie on the sixth hole.

He knocked in his putt for his first birdie of the day. It was his 17th birdie on the sixth hole, most of any player at the Masters since 1996.

The par 5s are supposed to be birdie holes

After waiting about 10 minutes for the group in front of him (which included Bryson DeChambeau) to clear the fairway, Woods made a mess of the par-5 eighth hole. It started out well. He hit a 280-yard drive down the middle and then a nice 230-yard shot with a fairway wood, leaving him about 50 yards short of the pin.

But Woods’ first chip was short of the green and his second one ended up 9 feet above the hole. He missed a par putt on the low side and ended up with a bogey.

“I’ll start with the disappointment: Just making bogey from 50 yards on the eighth,” Woods said. “Lack of concentration on the first one; second one, lack of commitment. Then a blocked putt. So just three bad shots in a row.”

According to data from ESPN Stats & Information, it was Woods’ third straight Masters appearance with at least one bogey on the eighth hole. He bogeyed it in the second round in 2019 and the third the next year.

As good as Woods’ putting was on Thursday, the rest of his work around the green left a lot to be desired. On the first hole, his wedge from 30 yards was 10 feet short. On the next hole, his shot from 45 yards was 17 feet short.

On the 14th hole, after a brilliant second shot out of pine straw, Woods’ ball was just over the green. Instead of putting, he tried to chip it close with a 4-iron. It went 8 feet past the hole. He missed the putt coming back and made bogey 5.

“I tried to bump and run a 4-iron through there and hit it way too hard,” Woods said. “I gave it a little extra juice because it was into the wind. I made a mistake and hit too hard and misread the putt just a touch.”

On the par-4 fifth, Woods hit a perfect 287-yard drive down the middle of the fairway. His second shot from 222 yards was just as good, leaving him 15 feet for birdie.

Tiger Woods fails to convert his first birdie putt of the day on the fifth hole.

Woods’ putt seemed to be on line the entire way, breaking from right to left to the hole. He even started to walk it in, but then it inexplicably lipped out on the left side. Woods stopped and turned away in disgust. He tapped in for par.

Despite the mistakes off the tee and around the green, Woods finds himself in contention at the Masters again. It was the 11th time that he shot under par in the first round at Augusta National. In the previous 10 instances, he finished in the top 10 nine times, including four of his five victories.

First, he’ll have to go through hours of treatment and exercises to help his body recover. Then he’ll do it all over again on Friday.

“Lots of treatments. Lots of ice. Lots of ice baths,” Woods said. “Just basically freezing myself to death. That’s just part of the deal. And getting all the swelling out as best as we possibly can and getting it mobile and warmed up, activated and explosive for the next day. Those are two totally different ends of the spectrum.

“Most sports, if you’re not feeling very good, you’ve got a teammate to pass it off to and they can kind of shoulder the load. Or in football, one day a week. Here, we’ve got four straight days, and there’s no one that’s going to shoulder the load besides me. I’ve got to figure out a way to do it.”