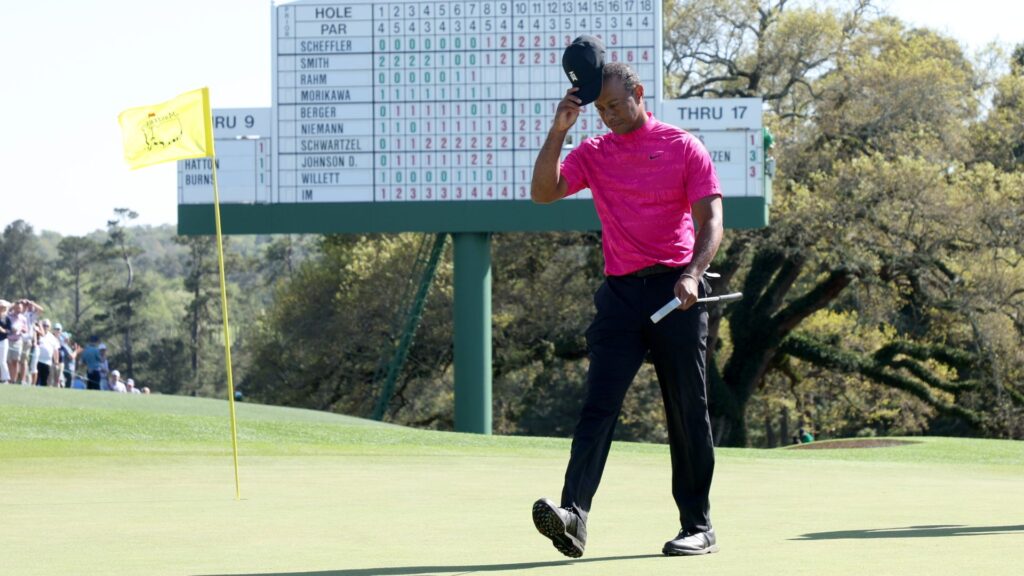 AUGUSTA, Ga. — The last of the morning spring chill, murder on Tiger Woods‘ aching, reconstructed leg, burned off as he started his round at the Masters. It felt nice in the shade here at Augusta National. Huge crowds ringed the entirety of the first hole. There might as well have been no one else playing.

Everything stopped at 11:04 a.m. ET on Thursday to watch Woods. Tournament employees abandoned their stations and rushed towards the ropes, as the major problem with professional golf came once more into focus: The most interesting thing in the sport isn’t the current stars showcasing their skills but whether a 46-year-old man can even walk around the course. Tiger isn’t the only story in golf, but he is the only story that matters for everyone who isn’t really into golf, if that makes sense. That energy was palpable for the first round at Augusta National Golf Club. The crowd murmured as he stood over the ball, roared when he made contact and cheered him on as he dug in for the steep rise up the fairway. He walked like a man spending all his energy trying not to limp.

He’s been the victim of his own violent swing, of his own bad decisions, of bad luck, but in the end, his legacy will be defined by how he has refused to be a victim at all. He could have quit after his car wreck. The 2019 Masters bought him peace. Instead he’s still out here. Whatever Tiger Woods is chasing now, it has little to do with his fellow golfers. There were two races being run on Thursday, as there will be any time Woods shows up to play an event. In one, a group of incredible talented competitors battle each other in a popular niche sport. In the other, one of the most-watched men of his generation is engaged in combat with his own body. If he simply makes it to the end he will emerge victorious, whether he wins or not.

He says he can win.

Tiger’s future, a time when he no longer believes, lurked everywhere around him at Augusta. Early on Thursday morning, as he got worked on by his pit crew of therapists, three golf legends took the annual ceremonial first shots, officially starting the tournament. The crowds let loose tremendous roars for Jack Nicklaus, Gary Player and Tom Watson, who were allowed the rare privilege of feeling a little of the magic they once took for granted as younger men.

“I get quite choked up when I get on that tee in the morning,” Player said.

Then the three legends rolled into the interview room for a great big saccharine nostalgia tour — a preview of what awaits Tiger Woods once he accepts that his days of competing for titles are finished. That didn’t feel imminent watching him Thursday. He’s fighting to keep from joining the museum pieces who hit ceremonial shots. It’s always hard to know when to leave.

“There’s nothing worse than seeing a punch-drunk boxer and athletes try and make comebacks,” Player said.

The three men were making jokes about their golf games when Player puffed out his chest.

“You’ve got the record,” Jack said. “We’re not challenging you.”

They were all rolling.

“I shot my age the first time when I was 64,” Nicklaus said.

That’s 18 years from now for Tiger Woods, who believes with reason that he has majors yet to win. There’s no joy for him in just making it around the course.

“He doesn’t want to play to play,” his friend Fred Couples said. “He can play at home.”

Yet the long, easy pasture of nostalgia awaits. He can see it. Earlier this week at the Champions Dinner, Woods sat around a table as Watson got Nicklaus to take all the former winners through the 1986 back nine, when Jack won his final major, when he was the same age Tiger is now.

“Do you want me to go shot by shot?” Nicklaus asked.

So Jack did it, yard by yard, everyone leaning in.

“I was looking around the table,” Watson said, “the guys at the table were just — they wanted to hear — because everybody at that table had been in that position before, winning the tournament. You could understand they wanted to hear the inside, what Jack was thinking inside as he played the last nine holes.”

Jack talked and Tiger listened, still a man soaking up information, looking for an edge, trying still to be writing his story, all while knowing that his own storytelling winter is coming up fast. His time as the doer of deeds is running short, maybe 10 more years if his back and leg cooperate. So while the rest of the field this week is working to win a tournament, Tiger is wrestling with the gravity that brings all great champions back down to earth.

He wrestled valiantly on Thursday. He rolled in three birdies. He pulled more than a few tee shots. He grabbed his back after a swing. He wore his pain on the outside for everyone to see. There was no hiding it. He tossed a tuft of grass into the air at Amen Corner and stared blankly down into the tunnel. His shots seemed to all land a little bit short. After one misbehaving ball rolled off the green, Tiger screamed down from the pine straw, “F— off!”

His swing held up. His body held up, mostly. Once he used his driver as a cane. Once he talked to himself, asking the air for help.

On the back nine he faced a lie in the pine straw, which required one of those famous Tiger moments. He closed his eyes for three or four full seconds. Some observers felt he was preparing his body for the pain. Then, centered, he unleashed a monster swing, his most powerful and violent of the day, his body twisting and rattling with gunshot recoil. The shot looked perfect.

He ended with momentum headed into Friday’s second round, saving par at the last hole. More than five hours after he started, he finished at 1 under, within striking distance of the lead. His first competitive round in 17 months was a success. Finally he left the course, not to rest but to endure the long ritual designed to get the swelling out of his leg so he can wake up the next day and try all this once more. He remains a public man chasing something private, a goal at once both brave and quixotic. Perhaps some distant version of him is watching through time with pride and amusement, already knowing how this all must end.