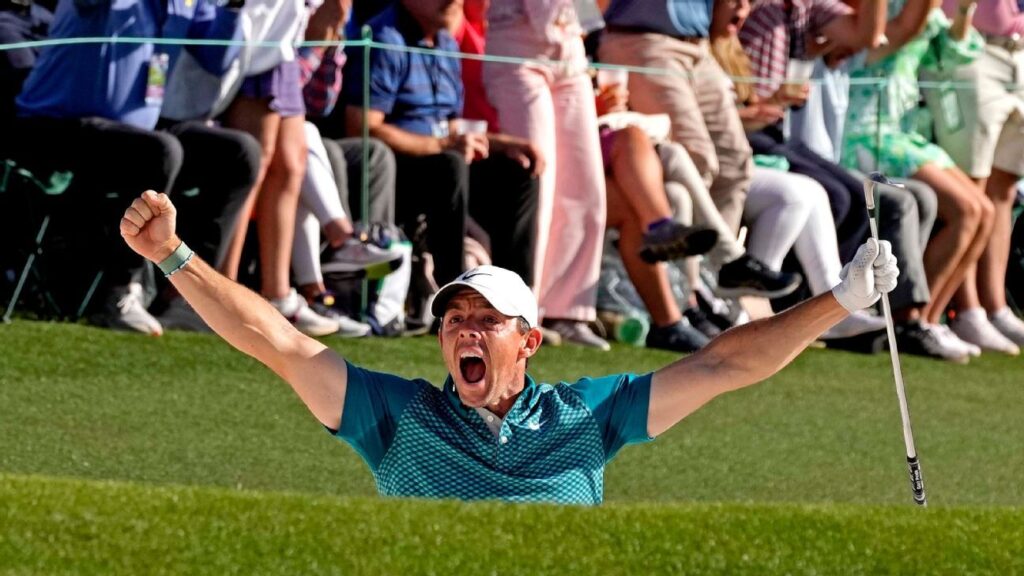 AUGUSTA, Ga. — Rory McIlroy has suffered plenty of heartache at the Masters.

McIlroy didn’t do it again on Sunday, but this time it hardly felt like defeat.

After starting Sunday 10 shots behind leader Scottie Scheffler, McIlroy matched the lowest score ever for a final round at the Masters with an 8-under 64. Seven other players have done it; Jordan Spieth was the last in 2018. McIlroy’s bogey-free round on Sunday was the only one in the tournament.

McIlroy finished in second at 7-under after 72 holes, 3 shots back of Scheffler. It was McIlroy’s best-ever finish at Augusta National.

“It’s what you dream about, right?” McIlroy said. “You dream about getting yourself in position. I wasn’t quite close enough to the lead. Scottie is playing really, really well. To play as well as I did today and then to finish like this, I mean, it’s just absolutely incredible.”

On the par-4 18th, McIlroy hit his tee shot into a fairway bunker. Then he hit his second shot into a greenside bunker on the right. He chipped out high above the hole and watched his ball fall down the green and drop into the hole.

McIlroy dropped his wedge in the sand, raised both arms above his head and hugged his caddie, Harry Diamond, after climbing out of the bunker. His playing partner, Collin Morikawa, holed out from the same bunker a few moments later.

“This tournament never ceases to amaze,” McIlroy said. “Yeah, that’s as happy as I’ve ever been on a golf course right there. Just having a chance, and then with Collin, we both played so well all day, and for both of us to finish like this, I was just so happy for him, too. That was incredible. I’ve never heard roars like that on the 18th green. It was really cool.”

It hasn’t always been a happy ending for McIlroy at Augusta National. In 2011, as a 21-year-old trying to win his first major championship, the Northern Irishman had a 4-shot lead going into the final round. His lead was trimmed to 1 shot going into the second nine. He duck-hooked his drive into cabins and made a triple-bogey on No. 10, three-putted for a bogey on 11 and four-putted for a double-bogey on 12. He shot a final-round 8-over 80 and tied for 15th.

The day after the devastating collapse, McIlroy re-tweeted a joke about there actually being houses at Augusta National. He recovered to become one of the world’s best players, winning the US Open later that same year, the PGA Championship in 2012 and 2014 and The Open in 2014.

He’s been trying to complete the career grand slam ever since. Jack Nicklaus, Tiger Woods, Ben Hogan, Gary Player and Gene Sarazen are the only players who have done it.

McIlroy has now finished in the top 10 at the Masters six times since completing three-fourths of the career grand slam. In 2018, McIlroy was in the final group on Sunday and was 3 shots behind Patrick Reed. McIlroy shot a 2-over 74 and tied for fifth, 6 shots behind Reed.

This time felt different. It seemed that he conquered the fabled golf course that has haunted him since that fateful Sunday in 2011.

“I’m maybe at a different stage of my life where back then golf was everything,” McIlroy said earlier this week. “Obviously, look, it’s still very, very important, but maybe back then I don’t know if I would feel like I was fulfilled if I didn’t win one or whatever it is. But it’s less pressure.

“Look, I know if I play well, I’ll give myself chances to win this golf tournament. It’s just a matter of going out there and executing the way you know that you can and stick to your game plan and be patient and be disciplined and all the things you need to do around Augusta National.”

McIlroy, 32, did that on Sunday. He opened his round with birdies on two of the first three holes. He nearly drove the green on the par-4, 350-yard third and made a 4-footer. He made two long putts from off the green-a 30-footer on the seventh and a 39-footer on the 10th. On the par-5 13th, McIlroy knocked his second shot from 203 yards to 10 feet and made an eagle.

“Probably come up a little bit short, but I gave it a great go, and I can’t ask any more of myself,” McIlroy said. “I went out there today, shot my best ever score at Augusta, and it’s going to be my best finish ever. Probably not quite good enough, but I’ll come back next year and keep trying.”