What we learned about Tiger Woods’ schedule, body and game at the 2022 Masters 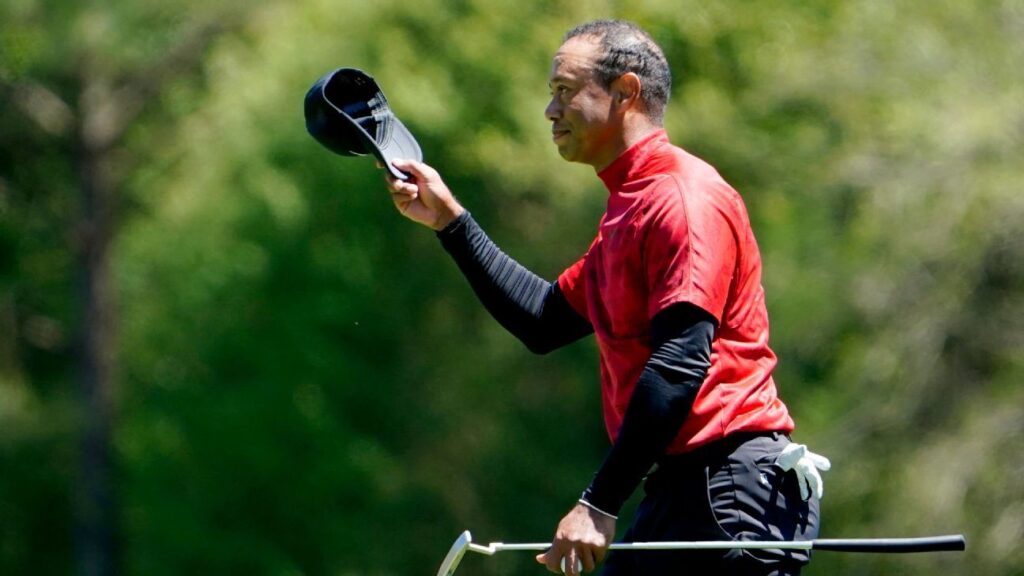 AUGUSTA, Ga. — After playing 72 holes over four straight days at one of the most demanding golf courses in the world, Tiger Woods was asked how much pain he was in on Sunday after finishing up his Masters.

Woods’ return to professional golf won’t be remembered for the consecutive rounds of 6-over 78, the worst in his career here, or his nearly unrecognizable putting on the slick greens of Augusta National Golf Course.

This past week will be remembered for the grit and determination he displayed while limping around the place where he had previously won five times. He refused to give in. Even though he posted his worst score in 24 Masters appearances as a professional, he completed and finished a tournament less than 14 months after he nearly lost his right leg in a car wreck outside Los Angeles.

“It’s one thing to play with my son at a hit-and-giggle, but it’s another thing to play in a major championship,” Woods said. “It’s been a tough road, and one that I’m very thankful to have the opportunity to be able to grind through it. A lot of different things could have happened, but 14 months [later], I’m able to tee it up and play in the Masters.”

What did we learn about Woods over the past week at Augusta National? And what comes next? Here are answers to those questions:

When will we see Tiger again?

Woods has said his days of playing a full schedule are over and he’ll only show up at the big events. At this point, the best guess — and it’s completely speculation — is that Tiger is eyeing the remaining three major championships and potentially the Hero World Challenge in the Bahamas, an event that benefits his foundation, in late November.

After his round Sunday, Woods told Sky Sports that he plans to play in The Open at St. Andrews in July. He isn’t yet sure if he’ll play in the PGA Championship at Southern Hills in May or the U.S. Open at The Country Club in Brookline, Massachusetts, in June.

“It’ll be just the big events,” Woods said. “I don’t know if it’ll be Southern Hills or not. But I am looking forward to St. Andrews. That is something that is near and dear to my heart. I’ve won two Opens there, it’s the home of golf. It’s my favorite golf course in the world, so I will be there for that one.

“But anything in between that, I don’t know. I will try, no doubt. Like this week, I will try to get ready for Southern Hills and we’ll see what this body is able to do.”

Finally, The Open will celebrate its 150th anniversary at the Old Course at St. Andrews in Scotland, starting July 14. Two of Woods’ three victories in The Open came at St. Andrews, in 2000 and 2005. St. Andrews is a links course, which is mostly flat, and would be the easiest walk.

Next year, Woods will probably play in the Genesis Invitational at Riviera, which he hosts. The tournament also benefits his foundation.

What did we learn about Tiger’s body?

Back in mid-February, when reporters at the Genesis Invitational were peppering Woods with questions about how soon he was coming back from the leg, ankle and foot injuries, he reminded them that he was also coming back from another procedure on his back.

Woods’ limp was more pronounced on the weekend, and it’s clear that playing 72 holes took a toll on him. He described his recovery treatment as multiple ice baths and basically “freezing himself to death.”

Woods revealed this week that he doesn’t have as much mobility in his ankle as he used to, and that he’s never going to get it back because of the rods, plates, pins and screws that surgeons used to put it back together. He has been forced to make changes to his swing to compensate for that, which is going to put even more stress on his back.

“The ankle is not going to move,” Woods said. “I got rods and plates and pins and screws and a bunch of different things in there. It’s never going to move like it used to. The more important thing is the ankle is always going to be an issue, but more importantly, if I play golf ballistically, it’s going to be the back. It’s fused. So it’s the levels above and below that are going to take the brunt of it.”

About two months before his car wreck, on Dec. 23, 2020, Woods had a procedure to relieve nerve pain in his lower back. He had spinal fusion surgery, a more invasive procedure, in April 2017.

“I’m still generating enough speed,” Woods said. “My ball speed is at 175 [mph]-ish when I hit it good, so that puts shearing on the back. I already had back issues going into this, and now this kind of just compounds it a little bit.”

Woods said his right leg will continue to get stronger as he continues to recover, but his mobility won’t get better.

“I can walk this golf course,” Woods said. “I can put on tennis shoes and go for a walk. That’s not a problem, but going ballistically at shots and hitting shot shapes off of uneven lies, that puts a whole new challenge to it.”

What did we learn about Tiger’s game?

In February, Woods said he hadn’t been able to do much in golf other than chipping, putting and hitting a few short irons. He said he hadn’t done much with long irons, his driver and fairway woods because he was still gaining strength in his leg and didn’t want to put too much pressure on it.

Surprisingly, Woods drove the ball well and averaged 284.9 yards over four rounds. He hit 67.9% of fairways. It was probably the strongest part of his game this week. His iron play was OK. He hit only 54.2% of greens.

Woods’ putting and chipping, on the other hand, were well below his standards. In the third round, he needed 36 putts, which was his most in a round here since he also had 36 in the third round in 1999. According to the PGA Tour, it was the first time in Woods’ career that he had five holes with three putts or more in a round. On Sunday, he needed 34 putts.

One can assume that part of his bad putting performance on Saturday can be attributed to the cold weather. It probably had something to do with his lack of energy and concentration, too.

“Just to be able to play, and not only just to play, but I put up a good first round,” Woods said. “I got myself there. I don’t quite have the endurance that I would like to have had, but as of a few weeks ago, didn’t even know if I was going to play in this event.

“To go from that to here, we’re excited about the prospects of the future, about training, about getting into that gym and doing some other stuff to get my leg stronger, which we haven’t been able to do because it needed more time to heal. I think it needs a couple more days to heal after this, but we’ll get back after it, and we’ll get into it.”

Did Woods just lock up $10 million?

As some players have suggested in the past, the PGA Tour might want to just go ahead and give the top prize from the $50 million player impact program bonus pool to Woods for the next five years or so. He didn’t even play in a PGA Tour event in 2021 and still won the most money. He got $8 million for that in 2021. The top spot earns $10 million in 2022.

It’s only April, but anyone else was going to have a difficult time catching him as soon as Woods showed up at Augusta National more than a week ago with Justin Thomas and his son, Charlie, to play a practice round. Woods’ tweet that he was coming to Augusta a week ago to continue practicing for the Masters might have been the icing on the cake.

Augusta National patrons, who weren’t sure they’d ever see them in the Masters again, were sure happy to see him this week.