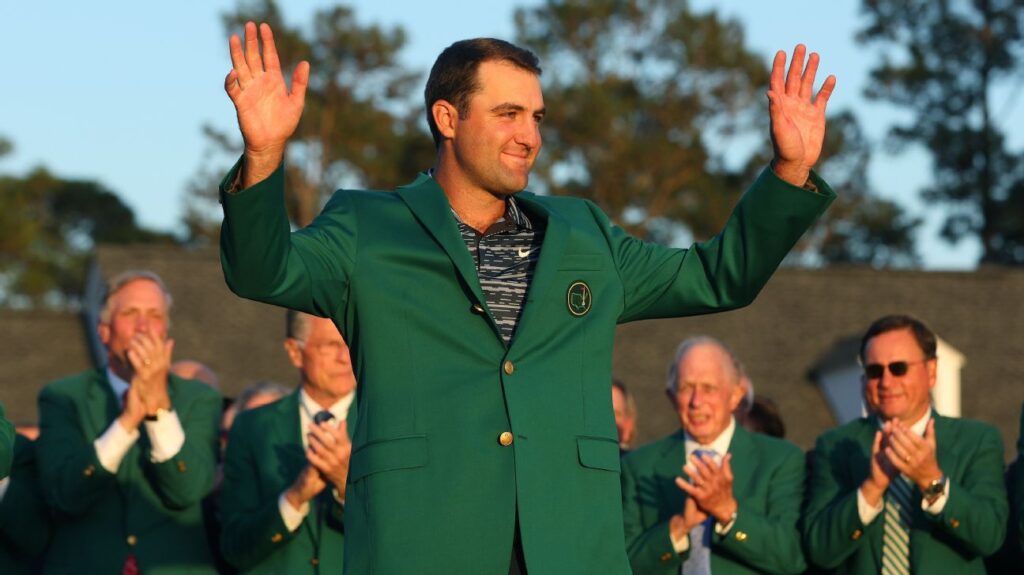 AUGUSTA, Ga. — Fifteen minutes after Scottie Scheffler won the Masters, a golf cart rushed him to the back door of Butler Cabin. The only sounds came from a drone circling overhead and a few birds. His green jacket waited inside. He looked dazed. Of course he did. In the past 57 days, he won four tournaments, including a major, and changed everything about his life. He can’t ever go back to the way things used to be.

He’s 25 years old. This season he’s made $10 million. Inside the cabin he slipped that jacket on for the first time — taking it off so he could repeat the ceremony in front of a crowd waiting for him around the 18th green — and after finishing an interview, he came back outside. He still looked a little dazed and enjoyed a few long seconds of silence until he came back into view of the patrons, who started cheering and clapping.

He broke down and cried this morning — “like a baby,” in his words — just overwhelmed with the moment: one round of golf to win the Masters, and the tornado which can take over a life after something like that. He’s seen it hit people he knows, like Jordan Spieth. He turned to his wife in tears.

She made him a big breakfast and tried to calm him down. She said she loved him whether he won or lost by 10. They talked about their shared faith. He got to the course and began to prepare.

“Gosh, it was a long morning,” he said. “It was long. My stomach has been hurting for two days straight.”

Back in Texas, at the Royal Oaks Country Club, the members and staff prepared, too.

Scheffler started playing there as a kid, after his parents took out a loan to join, all with the goal of following club members like Justin Leonard onto the PGA Tour.

His dream was to be a professional.

“I wore pants when I was a kid at Royal Oaks,” he said, “because I wanted to play golf on the PGA Tour.”

As a boy he wore those polo shirts and khakis to school, dressing like a touring pro. His classmates laughed.

“Rightfully so,” he said Sunday night, laughing, too.

As schoolboy golf legend in his home state, he played in college at Texas. On Saturday afternoon, Longhorns golf coach John Fields answered his phone in an airport, taking his current team out to California for an event. He chose the tournament because it was designed by Alister MacKenzie, who also designed a little track called Augusta National. Fields wants to prepare his guys for the biggest stages. Scheffler won that same tournament when he was a student. Fields watched the Masters on his phone as he waited at his gate. He’s almost part of the Scheffler family at this point. Five years ago, Scottie played in the U.S. Open at Erin Hills. He walked down the fairway next to Brooks Koepka, with his coach and father trailing behind. Scottie’s dad turned to Fields.

“Do you think he’s gonna be out here one day?” he asked.

It’s funny now, but Scottie’s dad really didn’t know. Fields did. He’d seen the real thing before — he coached Spieth, for instance — and he explained to his friend that the young man ahead of them was not only going to make the tour but build a career on it.

That prophecy has come true in the past 57 days.

On Super Bowl Sunday, Scheffler won his first tour event at the WM Phoenix Open. Back at the club, Moen bought a round of drinks for the 19th-hole crowd and raised a glass to Scottie and to the club. Everyone roared. These were his people. Then Scheffler kept winning, at the Arnold Palmer Invitational and the WGC-Dell Technologies Match Play. He rocketed up the world golf rankings to No. 1. At Royal Oaks between victories, he still worked with the kids on the range, coming up with chipping and putting games, often going as long as an hour. Before leaving home to come to Georgia, he played a round with three members. Then he packed for the Masters. He couldn’t believe it. When his first invitation came in the mail, he teared up. These past 57 days, he’s been a young man living in a dreamscape.

“I don’t think anything has sunk in at the moment,” he said. “My head is skill kind of spinning.”

He arrived in Augusta beneath the radar a bit, even with all his success. All eyes were on Tiger Woods, who was returning to competitive golf only 14 months after a car wreck nearly cost him his leg. Scheffler wasn’t even a year old when Woods won for the first time here.

“His YouTube clips are such an inspiration for me,” he said. “I remember watching the highlights of him winning in ’97, kind of running away with it, and he never really broke his concentration.”

Now Scheffler wears Tiger brand golf shoes and shirts, and uses his irons, although he’s probably got his own line of all three coming soon. He outplayed the legend on Thursday. On Friday, as Tiger’s surgically repaired knee began to fail him, Scheffler took the lead. He kept it Saturday and after his long night and fraught, tearful morning, he went out Sunday afternoon to defend it.

His toughest competition came from Rory McIlroy, who tied a final-round Masters record with a scorching 64. He birdied 18 and his roar echoed across the course. Rory had the biggest roars of the afternoon. Truth be told, the atmosphere on Sunday was muted. As Scheffler made his way home through the back nine, there were open spaces on the ropes which are often five and six deep for these coronation marches. More than a few people hoped for some sort of collapse to give McIlroy a shot at the career grand slam.

Back at Royal Oaks, the 19th hole turned standing room only. When Scottie chipped in on No. 3, the biggest shot of his life, the clubhouse erupted. A man ran around the room giving out high fives. Hole by hole, the room leaned in during the tense moments, feet digging into the red and yellow carpets. Guys drank from white Styrofoam cups.

When he birdied 14 and sealed the victory, grown men hugged and rubbed each other’s heads like school kids. They knew Scottie as a child, and now he was going to win the same tournament as Ben Hogan, and Jack Nicklaus, and Tiger Woods. A chant broke out in the room, calling for shots.