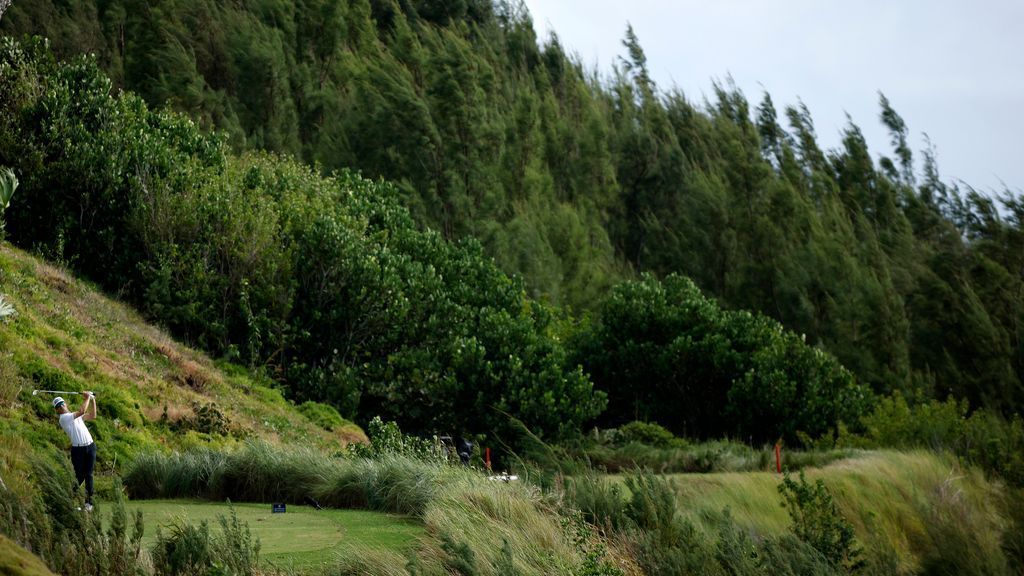 SOUTHAMPTON, Bermuda — Brandon Hagy and Chad Ramey avoided the worst of the wind Thursday afternoon, each with a 6-under 65 to share the lead in the Bermuda Championship when the opening round at Port Royal was halted by darkness.

For those who started in the morning, it might have been easier playing in the dark.

“You see winds like this, but normally you don’t play in them,” said Matt Fitzpatrick of England, who had every right to be satisfied with his even-par 71.

The wind and spots of heavy rain were so fierce that play was suspended briefly in the morning. And while it eased slightly in the afternoon, the gusts were strong enough that short putts were nervy and judging the distance on approach shots was key.

Ramey managed to finish off a bogey-free round right before play was halted. Hagy made nine birdies to offset his bogeys, one of which was a 2-foot par putt he missed on the par-5 seventh hole. There was not much he could about it — the result was largely due to a gust.

Vincent Whaley had a 66, while Palmetto Championship winner Garrick Higgo, Seamus Power of Ireland and Danny Lee were among those at 67.

The group at 68 included Patrick Reed, at No. 24 the highest-ranked player in the field. He opened with three straight birdies only to give most of it back with a double bogey. This was a day for flighting the ball, such as the chip 8-iron from 118 yards. For so much of the day, the actual yardage was irrelevant.

Reed was coming off a bogey on the 16th when he drove into a hazard on the par-5 17th. He took a penalty drop, and then hit 6-iron that plopped down near the hole and dropped for a most unusual eagle.

His playing partners all drove into the hazard on the 17th and they managed to collectively play the hole in 3 under.

When play was stopped, 33 players were under par, some having to return Friday morning to complete the first round. Only six of those scores under par came from the morning.

Russell Knox, who grew up near Inverness in Scotland, was among the early starters and had few complaints with a 72. He was happy to be standing up.

“We were down on the ground holding an umbrella. My fingers were cramping I’m holding on so tight, and it was pouring rain as hard as it’s ever rained,” he said. “It was an interesting day.”

Hagy got a sense of that when he started in the afternoon and saw so few scores under par. Greyson Sigg and Austin Eckroat had the best rounds of the early starters at 68. They played with Seth Reeves, who had a 69. They represented half of the scores under par from the morning side of the draw.

“I think it laid down a little bit for us, but it was still pretty stout,” Hagy said. “But I hit a lot of good putts and they went in. I think there’s going to be some times where you get gusts and the ball doesn’t go in, but you kind of have to keep your head down and keep trying to hit some good shots.”

It has already been a week like no other at the Butterfield Bermuda Championship, which is offering full FedEx Cup points because it is not opposite the World Golf Championship in Shanghai, canceled for the second straight year because of the pandemic.

That means the winner gets into the Masters, and only four players in the field already are eligible for Augusta National in April. The 132-man field started with only 126 players because of so many withdrawals, some by players who rarely play anymore.

Brian Gay, the defending champion, was bumped from his flight to Bermuda because the plane was too heavy. He arrived on Tuesday afternoon and didn’t get to play a practice round when the pro-am was canceled. Gay opened with a 75.

“We definitely got the easier part of the day there in the afternoon, but it’s still a strong enough wind that your score could get away from you if you lost control of your ball,” Power said. “Hanging in there was the thing today.”