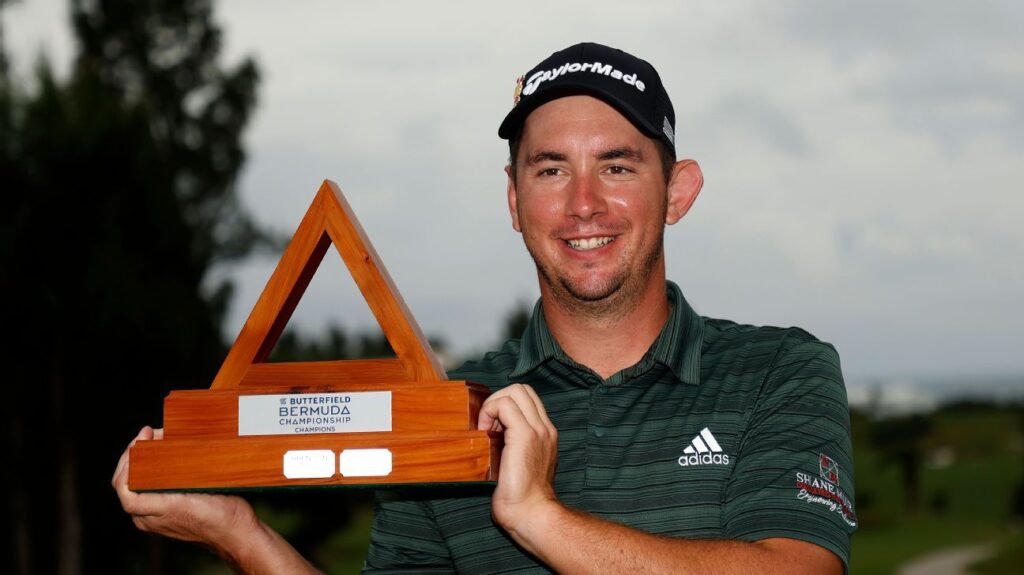 SOUTHAMPTON, Bermuda — Lucas Herbert had two birdies during the toughest, wind-blown stretch of Port Royal and held steady to the end Sunday for a 2-under 69 to win the Butterfield Bermuda Championship.

Herbert closed with four pars to hold off Danny Lee (71) and Patrick Reed, who finished with four birdies over his last six holes for a 65 and then waited to see if it would be enough.

Herbert, the 25-year-old Australian who won the Irish Open earlier this year, stayed in front by closing with two good par saves and missing a pair of 7-foot birdie attempts he didn’t need.

His first PGA Tour victory, and third worldwide, sends him to the Masters for the first time.

“It opens up so many doors,” said Herbert, who earned his PGA Tour card through the Korn Ferry Tour Finals two months ago. He had missed the cut in his other two starts this season.

The wind and rain, which caused tee times to be moved up, was as fierce as advertised, and play was halted briefly without having to bring the players off the course.

“I felt like I grinded really well early and I had the right attitude going into the day that it wasn’t going to be easy,” Herbert said. “You just knew it was going to be one of those days where you had to battle really, really hard. Under par was going to be a great score.”

Taylor Pendrith of Canada, who started the final round with a 3-shot lead, failed to make a birdie in closing with a 76 to tie for fifth.

Pendrith had three straight bogeys starting at No. 6 and was still very much in the mix, 1 shot behind going to the reachable par-5 17th. But he pulled his drive into the water, hit his third into the water and missed a 5-foot putt to take double bogey.

He wasn’t the only player who can look back at missed chances.

Danny Lee had a 1-shot lead and appeared to be in control of his game until it all fell apart for him on the 12th hole. He went long of the green, pitched to the back collar and then used a fairway metal to bump his shot about 7 feet by the hole, missing that to take double bogey.

Reed was well ahead of them and didn’t appear to be in the mix until he knocked in a pair of 30-foot birdie putts, made a 12-foot par putt on the par-3 16th and finished with two birdies.

That wasn’t the best round of the day. Scott Stallings started 14 shots behind, began his round on No. 10 and pulled to within 2 shots before running out of birdies. Stallings still managed a 62 and went from a tie for 50th to a tie for fifth.

Patrick Rodgers had a 70 and finished alone in fourth.

Lee followed his double bogey with a pair of bogeys before making one last push. He birdied the next three holes, sending his tee shot on the par-3 16th out over the ocean and letting the wind bring it back to 15 feet.

Trailing Herbert by one on the 18th, Lee missed the green and had to get up-and-down for par. Herbert played wisely and conservatively, using his power to lean on a driving iron on the final two holes that eliminated trouble.

“This finishing stretch kind of played into my hands a little bit,” Herbert said. “I felt like probably the strengths of my game — the longer game, whether it be long irons or 3-woods, drivers off tee — I felt like that really played in my wheelhouse. So I just tried to really stay positive with the swings.”