Can Scottie Scheffler stay hot, biggest surprises and what to expect from Tiger Woods on Sunday at the Masters 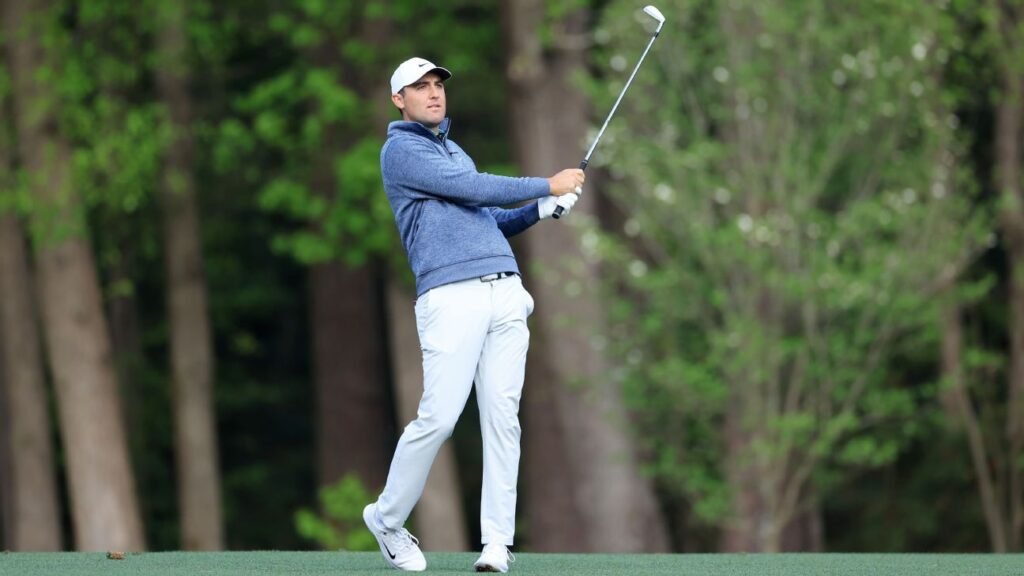 The Masters appeared to be headed toward a drama-less Sunday. Scottie Scheffler, the No. 1 player in the world, seemed like he was about to run away from the field. But a few stumbles at the end might make Sunday at Augusta National a little more interesting.

So we rounded up our experts to gauge whether Scheffler can be caught. Plus, after a rough third round, we check in on Tiger Woods and what to expect from one more walk, and limp, around the place on Sunday.

Can anyone catch Scottie Scheffler?

Mark Schlabach: Probably not. Watch his second shot on the 18th on Saturday, after he had to take a drop for an unplayable lie. Scheffler has never won a major championship, but he is fearless and is playing better than everyone else right now. He was a little bit shaky at the end of the second nine on Saturday, but he still walked away with a 3-stroke lead. I think Scheffler is playing too well to squander it. There’s going to be a ton of pressure on him on the second nine on Sunday. The Texan has been on a nearly two-month heater that few golfers have ever experienced, and it’s probably going to culminate with him winning his first major and a green jacket.

Michael Collins: Nope. Too much has to go wrong for him and way too much has to go right for others to catch him. It wouldn’t just take Scottie making mistakes, it would also take someone playing almost perfect. No one will.

Nick Pietruszkiewicz: When he walked off the 13th green, I would have said no chance. When he made bogey at No. 14, I would have still said probably not. But the bogey at the par-5 15th and the one at the last make this thing interesting. It’s no longer a Sunday coronation. Will he still win? I still think so, but it wasn’t the foregone conclusion it seemed like it was when he walked away from Amen Corner on Saturday.

Tom VanHaaren: Scheffler is the fifth player ranked world No. 1 to hold the 54-hole lead at the Masters. Greg Norman is the only player in that stat who didn’t win, when Norman blew a 6-shot lead in 1996. Scheffler faltered a little on the back nine on Saturday, but it doesn’t seem likely he loses given how he has played all week.

Schlabach: Again, I’d be surprised if anyone catches him, but I like Cameron Smith‘s chances more than anyone else’s. He fired a 4-under 68 in the first round and the third. The Australian hasn’t won a major championship yet, but he came out on top at the Players Championship, which is as big as any tournament out there (especially when it comes to the purse). They’ll be in the final pairing together, and if Smith can put a couple of early birdies on his scorecard, he can at least apply some pressure to Scheffler.

Pietruszkiewicz: Smith is 3 shots back and Sungjae Im is 5 back. So they are in the ballgame. The one I still wouldn’t rule out is Shane Lowry. Seven shots in the hole is a lot, but wild things happen around these parts when the leaders turn for home on the second nine. So, yes, Lowry still has a chance. But the best option is Smith.

VanHaaren: Smith has shot 68 twice this week, so it doesn’t seem completely out of the question that he can at least make it a challenge. The 74 he shot in between those two rounds of 68 is where the concern is, but given how difficult the course has played, he is right in it. Smith now has nine career rounds in the 60s at Augusta, which breaks a tie for the most by any player across the past five Masters. So if there’s anyone Scheffler doesn’t want chasing him right now, it’s probably Smith.

Which hole does Scheffler have to survive to get himself a green jacket?

Schlabach: Is it the first few holes? Scheffler bogeyed Nos. 1 and 3 in the second round on Friday. If he stumbles early and Smith is able to put up some red numbers, things might get interesting. But Scheffler is so good around the green and his putter has been hot, so I’d be surprised if he doesn’t close the deal.

Collins: Nos. 11 and 12. Get through two thirds of Amen Corner at even par or better and they can start sewing a new green jacket.

Pietruszkiewicz: It’s 12. It’s always 12. Find dry land. If the first one goes into Rae’s Creek, there’s no guarantee the next one — and the next one — won’t follow.

VanHaaren: I agree with Mark that it’s probably getting through the first few holes, but it also likely depends on how close it is on the back nine. He has played the 14th at 1 over and 18th at 1 over this week, so if it’s close heading into 14 or 18, maybe that gets into his head down the stretch.

What do you expect out of Tiger Woods’ last go-round at this Masters?

Schlabach: Tiger didn’t look very good after the third round. He admitted his back was tight in the cold conditions and he appeared to have a much more pronounced limp after playing 18 on Saturday. I don’t think he’s going to withdraw. I think he has too much pride and is too competitive to not finish the tournament. I also think he’ll be highly motivated to right the ship after a 6-over 78 on Saturday, his worst score in 93 career rounds at Augusta National. He drove the ball well and was pretty good with his irons. It was just that his putting was atrocious. I think he’ll be better on Sunday.

Collins: I expect Tiger to shoot around 75. Can’t imagine the exhaustion he has to be feeling. I say that because you can’t create adrenaline. Every day he’s had to deal with a crash he couldn’t prep for. Sunday will be all about finding out how far he is from the finishing strength he’ll need to win again.

Pietruszkiewicz: Survival. Just get through the day. The pain really showed through Saturday. So, with the weather expected to warm up, he should enjoy a stroll around Augusta National and revel in the accomplishment and hard work that got him from where he was 14 months ago to where he will be Sunday afternoon.

VanHaaren: I have to imagine this entire week is catching up to him if it hasn’t already caught up to him. I didn’t really know what to expect coming in, given the fact that he’s 46, has had multiple injuries and surgeries and this is Augusta with hills everywhere. I’ll admit I was a little optimistic after his first-round 71, but the scores have progressively gone up since. I know he’s a competitor, but when the body slows, it slows.

Which player has been the biggest surprise this week?

Schlabach: It has to be former champions Danny Willett or Charl Schwartzel, right? Willett had missed the cut at the Masters in four of his past five starts. He hasn’t had a top-20 finish on tour since tying for 18th at the RBC Classic in March 2021. But he’s eighth after 54 holes. Schwartzel is ranked No. 172 in the world and missed the cut seven times in nine tour starts this season. He’s tied for fourth, but probably won’t be much of a factor on Sunday. Still, their performances this week were completely unexpected.

Collins: Schwartzel. This man has missed his last six cuts in a row! There may be plenty of golfers who’ve used the term, “I’m close.” But if Charl was using it, the response would have been, “To what? The car on Friday?”

Pietruszkiewicz: I hate to agree, mostly out of principle, but Schwartzel had no business being in the final group on Saturday given how he played in the months and weeks leading up to this. And he hit it all over the galaxy on Saturday, but still put up a reasonable score and remains in the mix — sort of.

VanHaaren: I agree about Schwartzel. I didn’t see that coming. Maybe I shouldn’t be surprised anymore, but I have also been surprised by Cam Smith. He just keeps showing up at the top of leaderboards and hasn’t faltered.

Who has been the biggest disappointment?

Schlabach: Take your pick: Brooks Koepka, Jordan Spieth, Xander Schauffele or Bryson DeChambeau. They all missed the cut. At least DeChambeau is injured. Spieth is probably the biggest concern because his game seems out of sorts again. The 12th hole at Augusta National is still haunting him.

Collins: Koepka. For a guy who wasn’t injured, he sure played like someone who was.

Pietruszkiewicz: Rory McIlroy. Sure, he might go out and shoot 67 or better on Sunday and backdoor his way into a top-5, but he was never a factor in this tournament. And it seems like it keeps happening here. Maybe the place is in his head and will never leave. But it remains stunning that he keeps coming here and can’t make a run.

VanHaaren: I know DeChambeau hasn’t played a ton, but he was beaten by 63-year-old Larry Mize this week. I’ll cut DeChambeau some slack if he’s still dealing with his injury, though. I was surprised by Koepka’s performance as well. I thought this might be a week where we see him break through again at a major. He had four top-10 finishes in 2021 in majors and now he has missed the cut six times this season.