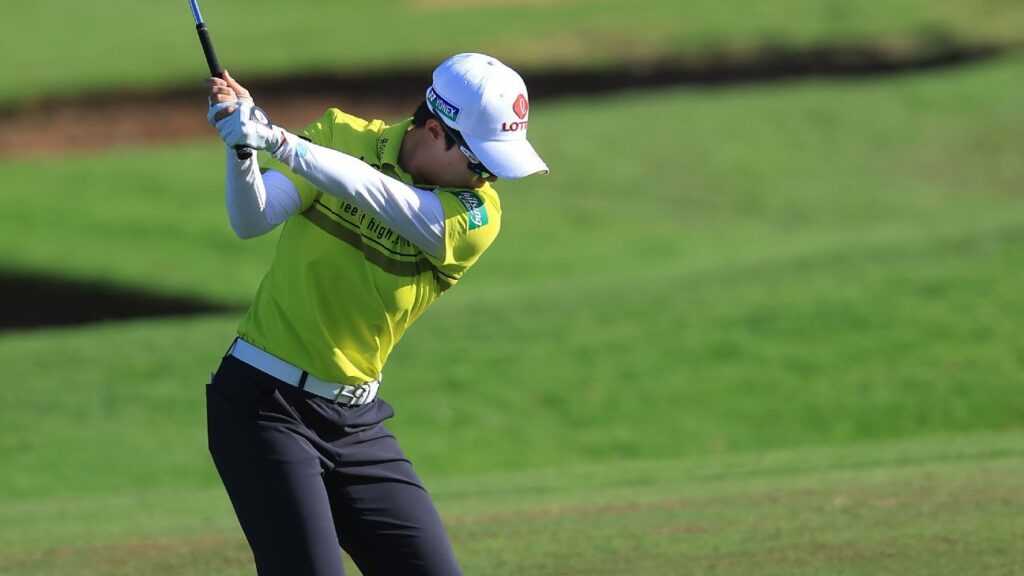 EWA BEACH, Hawaii — Hyo Joo Kim birdied three of the final six holes for her second 5-under 67 and a three-stroke lead Thursday after the second round of the LPGA Tour’s Lotte Championship.

Kim closed with birdies on the par-4 13th and 16th holes and the par-5 18th to reach 10 under at windy Hoakalei Country Club, the first-year venue on the south shore of Oahu about 20 miles west of Honolulu. Kim had her second bogey-free round.

“First of all, I’m satisfied,” said Kim, the 26-year-old major champion from South Korea. “I played the same score and bogey-free round as yesterday, but more satisfied with today’s play than yesterday.”

Kim, who tied for eighth at Mission Hills in the California desert two weeks ago and has four victories on the tour, birdied the 13th and 16th holes for the second straight round. She has played the back nine in 7 under.

Kim has played in the Lotte Championship every year since the tournament debuted in 2012. Her best finishes at the event came in 2014, when she was fourth, and 2015, when she tied for fourth.

Sarah Kemp of Australia was second after a 69. She chipped in for birdie on the par-4 14th.

“Really solid. Lots of fairways, greens,” Kemp said. “I had a chip-in. Rolled it really well. It was just steady. I hit one fairway bunker short, but just overall really steady.”

Ariya Jutanugarn birdied two of her first five holes in a 68. She was four strokes back at 6 under along with Haeji Kang. A Lim Kim followed an opening 72 with a 67 to get to 5 under, along with Na Rin An (68).

“It’s really windy here and sometimes there’s a gust (of) wind,” A Lim Kim said. “I think it’s a place where you have to play smart because the greens are firm.”

Australia’s Hannah Green, the first-round leader at 66, shot a 76 to fall eight strokes back.

Two-time Lotte champion Brooke Henderson withdrew due to illness before the start of her round Thursday. The Canadian shot a 74 on Wednesday.